Muscle Scraping: Before & After (Graston Technique)

With the Graston Technique getting a lot of hype in the health and fitness industry for its many benefits, it’s no surprise that many people are curious about it.

There’s a ton of pictures floating around social media where people are showing how bruised up they are after a muscle scraping session, but also saying how much looser they are after treatment versus before.

So, what does muscle scraping really look like before and after your treatment?

In this article, we’ll explore what to expect for your Graston Technique treatment, how to prep for it, recovery after a session, and some examples of real people who’ve gone through this and what they have to say about it.

What To Expect Before Graston Technique

Now that you know you can use muscle scraping and enjoy its benefits, let’s talk about what to expect before you jump into treatment.

There’s not much you have to do in terms of prepping for a session — just make sure your skin is clean…it can be uncomfortable (even painful) to scrape a tool over dirty or grimy skin.

If you’re going into a physical therapy clinic or seeing another muscle scraping provider rather than doing it yourself, you can expect:

Real Example Of Before Graston Technique

The example I’m going to show you here is performed by Dr. Edward McLaughlin from McLaughlin Chiropractic, who made a video working with someone who was in a car accident.

This patient is struggling with neck pain, and has had issues with poor posture from years of desk-work and playing the guitar.

So, before they get into treatment, they do some testing and discussing to see what the patient’s baseline is, which will help to see if the muscle scraping actually works.

Here’s a look at what the patient’s skin looks like before muscle scraping, with some light redness showing up where the provider did some massage:

As you can see, the skin is still clear here — although that changes dramatically real soon, along with how he’s feeling…

What To Expect After Graston Technique

People are very unique, which means that we could all respond differently to muscle scraping.

However, there are usually a couple of things everyone can expect:

These things tend to show up in everyone that does Graston Technique or one of the other types of muscle scraping.

However, these things show up in different intensities — I, for example, may have very little soreness after a session, whereas you might have tighter muscles or a more focused session that gives you a little more intense or longer-lasting soreness.

Before & After Muscle Scraping: A Real Example

Going back to that example we just used, the patient went through a muscle scraping session for his entire back and shoulders.

That’s a pretty drastic before and after…

However, with this drastic change in what the skin looks like, the patient also had an interesting thing to say about how he was feeling after treatment.

“I feel way more loosened up than I have in years.”1https://www.youtube.com/watch?v=F55TpoQZSeg

This is very common — the pictures look like you should be dying in pain, but the truth is you should actually feel good!

And the example we used is someone who has been struggling with tight muscles and pain for years, with a neck injury after a car crash — the fact that muscle scraping helped him out this quick is good news for all of us!

Since muscle scraping is safe and effective, the visual before and after is less important — you should focus on how your body feels rather than what it looks like after treatment.

Is Graston Technique Right For You?

There are a ton of people who can benefit from muscle scraping, and many different people take advantage of it.

Athletes and bodybuilders are a prime example of people that use the Graston Technique, often from professionals, but also by doing it on themselves!

I also see a lot of people get benefits out of it when dealing with injuries or different conditions like plantar fasciitis.

Basically, anyone who wants to relax their muscles, decrease their pain, help their body recover, and deal with certain injuries can get into muscle scraping!

Muscle scraping, including the Graston Technique, can have some pretty intense before and after pictures.

The redness and bruising make it seem that it causes pain, and makes many people nervous about what to expect.

The truth is, the crazy differences in what your body looks like after muscle scraping is just a by-product of the awesome results that it can have for you, as shown by our example.

Expect some redness and soreness, but listen to how your body responds — then you’ll get the most benefit out of your muscle scraping experience! 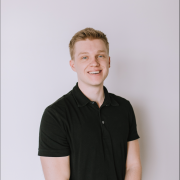 I'm Eric, a physiotherapist with a Bachelor’s degree in Kinesiology and a Master’s degree in Physiotherapy from the University Of Manitoba. I have enjoyed the better part of a decade working with both amateur and professional athletes, weekend warriors, everyday people, and patients at hospitals to help them take control of their pain and reach their health goals.

Learn more about me...

My name’s Harvey Meale and I’m a sports science researcher and the founder of Jump Stronger, a publication focused around the subject of educating athletes on how to increase their vertical jump…

While our primary focus remains on helping athletes develop into stronger, more explosive versions of themselves, Jump Stronger has expanded into the broader domain of all things sports performance.

We write informational articles about a variety of strength and conditioning subjects while also priding ourselves on having some of the most comprehensive and well-researched product reviews on the internet.

We also have an in-house staff writer who’s a qualified physiotherapist producing content on a number of injury and rehabilitation related subjects.

For more training tips and video product reviews, join us on YouTube!

Our objective with Jump Stronger is to create the most helpful resource for anyone interested in becoming a stronger and more explosive athlete. Part of this includes producing the most comprehensive and insightful product reviews in the space, and it also means finding and distilling the key takeaways from the latest science surrounding strength and conditioning.

Jump Stronger is a participant in the Amazon Services LLC Associates Program, an affiliate advertising program designed to provide a means for sites to earn advertising fees by advertising and linking to Amazon.com.